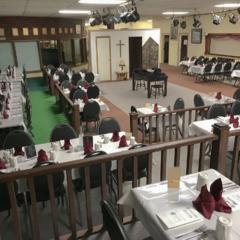 Creelman Theatrical Club was formed in 1981. It began as a fund-raiser, serving up a dinner theatre to raise money to help pay for the construction of a new rink. The old rink had been destroyed in a wind storm. The play that year was W. O. Mitchell's "Black Bonspiel of Wullie MacCrimmon". Initially, we had planned on one night, but it was so popular, six performances were held to sold out audiences that year.

We've been going strong ever since, and are planning our 40th production in 2020. Our dinner theatre is held during the last week of Novembe and first week of December.