TheatreFest is Theatre Saskatchewan Inc's annual competitive festival.  This year our festival will be in Melfort, Saskatchewan, and it will be our first TheatreFest since 2019!  The goal of TheatreFest is to inspire community theatre groups to strive toward excellence in theatrical production and to recognize their commitment and hard work through an adjudication process.  Community Theatre Groups from around the province will travel to Melfort from April 20 to 23rd to perform and compete for awards.

The story follows the attempt by a young theatrical agent to reunite his elderly uncle, a former vaudevillian great, with is long-time stage partner for a TV reunion.  Despite their celebrated reputation, the two old men have not spoken in twelve years.  Besides mastering their sketch, the two men have numerous issues to work out before they are ready to return to the public eye.

A clever dog (played onstage by a human) enters the life of a husband and wife going through some tough times in New York.

A funny, fast-paced, heartwarming story of friendship; over the course of eighteen holes, secrets and confessions unravel as the women discuss love, sex, children, and everything in between.

Hot. Burning hot. In the dry, hot summer of 1988, Kate, a young city woman, moves with her boyfriend to his family's Saskatchewan farm.​

Sunday, April 24 - Awards Ceremony, admission is free but seating is limited so please book your ticket!  Food will be available for purchase. 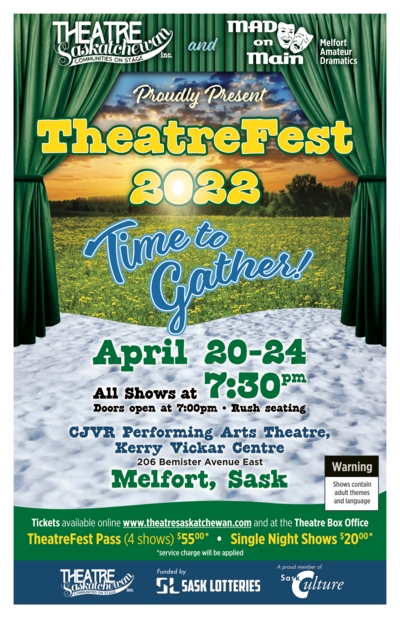